A Triptych of Seafloor Oases 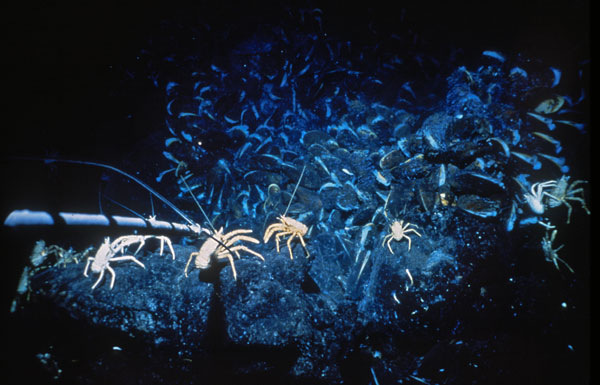 On a 1979 return trip by scientists to the Galapagos Rift (this time including biologists), Alvin explored unexpected oases of life on the seafloor. Here, Alvin’s meter-long temperature probe extends toward a community of galatheid crabs perched atop pillow lava and a dense field of mussels. (Photo by Robert Hessler)

As the new and improved Alvin gets its sea legs, starting a new chapter of oceanographic discovery, many of us are looking back on the sub’s 50 years of exploration. As a geobiologist intrigued by the limits of life, many Alvin-supported discoveries have shaped my field, but three in particular stand out: the triptych of seafloor oases.

For the first several thousand years of our species’ quest for knowledge, understanding the domain of life seemed pretty straightforward: it crawled, flew, or swam pretty close to the hard surface we walked around on. It was seemingly dependent upon the ball of bright light in the sky and the liquid water in the rivers and seas. A logical consequence of this mindset was that a celestial body’s ability to sustain life required just the right amount of starlight, an ideal placement in the “Goldilocks zone.” Too far away, and the distant spray of photons could be too diffuse, while your planet’s surface water, if present, would likely be frozen solid. Too close, and high temperatures and pernicious radiation become problematic.

Given this calculus, what happened aboard Alvin in 1979, far below the surface of the Pacific Ocean, was remarkable. As the sub approached a region of unusually high temperature, a shocking abundance of life and roiling black-colored fluid came into focus. Subsequent investigations would reveal that the “black smoke” was actually reduced, superheated fluid with abundant metal-rich oxides. The chemical disequilibrium between the electron-rich fluid, which had been heated by sub-crustal magma chambers, and the cold, oxygenated seawater generated electrical energy, much like a discharging battery, and life took advantage. These hydrothermal vents—as well as more diffuse vents found two years earlier by the deep-towed camera system Angus and more fully explored by Alvin at the Galapagos spreading center—made one thing abundantly clear: Life could survive on chemical energy—a process known as chemosynthesis—far removed from the sun.

Six years later, the Alvin-supported discovery of “cold seeps” in the Gulf of Mexico bolstered the case for dark life as more than a one-off curiosity. Here, fluids packed with hydrocarbons—a product of organic matter breakdown over the course of millennia—emerge from the seafloor at the whimsy of localized faults. Microbial opportunists in the sediment and rocks get to the hydrocarbons first, forming the basis of the larger ecosystem. Less photogenic than hydrothermal black smokers but often just as biologically productive, cold seeps harbor thick, gooey microbial mats, tube worms, and expansive clam fields.

Lost City was another game-changer. Evocatively named and beautifully sculpted, the stark white chimneys in the middle of the Atlantic Ocean represent a third flavor of seafloor oasis. Here (and so far, only here, as Lost City is the only known vent field of its kind) seawater comes into contact with peridotite—mantle rock exposed by tectonics at the seafloor. This type of rock typically occurs much deeper, and its relatively shallow placement at Lost City places the peridotite in chemical imbalance with its surroundings. But with disequilibrium comes energetic potential, and the reaction of peridotite-hosted olivine with seawater ultimately leads to lots of heat, methane, and hydrogen—a potent mix for life. Lost City was discovered in 2000, but a follow-up Alvin expedition in 2003 greatly enhanced our scientific knowledge of the site.

Alvin has been intimately involved with the revelation of three profoundly distinct seafloor ecosystems that have changed our conception of life on Earth and our anticipation of life elsewhere in the universe. What other distinct biological systems remain to be discovered on the seafloor? Only time—and, quite likely, reports from Alvin—will tell.