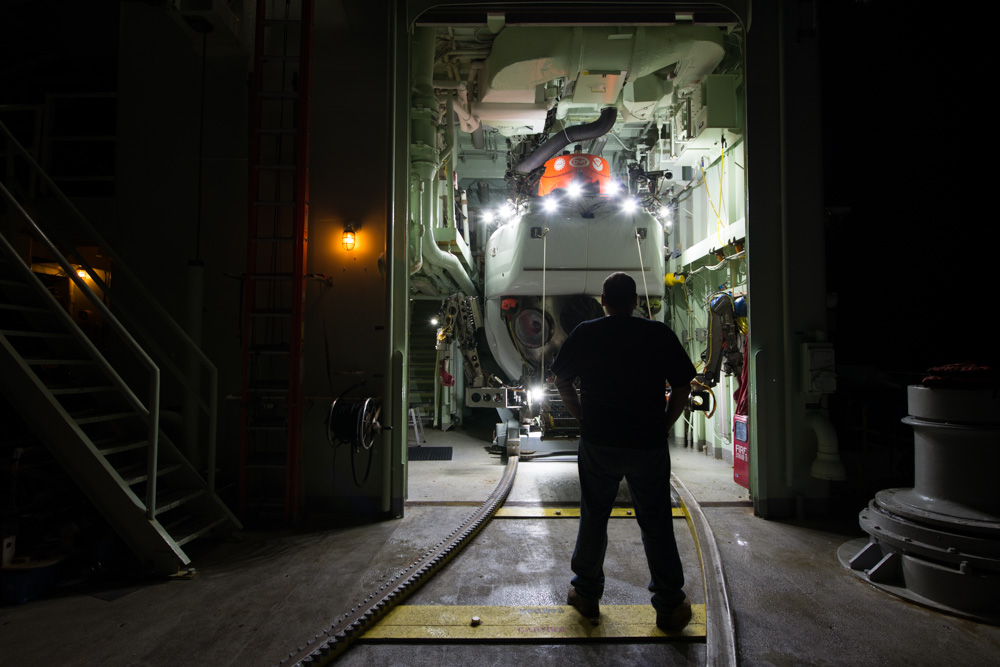 Peter Girguis, chief scientist of the Alvin Science Verification Cruise, stands before the sub during nighttime tests of the sub's lighting. Scientists and engineers are experimenting with adding and positioning lights to optimize Alvin's imaging capabilities. (Photo by Chris Linder, Woods Hole Oceanographic Institution)
On Thursday, scientists on the Alvin Verification Cruise adjusted high-intensity LED lights on the sub’s “brow” and just above the forward viewports (not seen in this drawing) to perfect the lighting so they can obtain sharp, shadow- and glare-free photos and videos from the sub. (Illustration by E. Paul Oberlander, Woods Hole Oceanographic Institution)

The whole objective of this research cruise is to test a newly rebuilt Alvin equipped with upgraded systems that had never been used before by scientists under field conditions. Scientists and engineers expected hiccups and learning curves. After four test dives of Alvin, it was time to tweak, troubleshoot, and optimize.

Thursday’s dive was postponed while the research team analyzed glitches in data collection, organized experiments with lighting, and assessed the research vessel Atlantis’ system to launch and recover Alvin, which had also undergone significant changes to accommodate the new sub.

“We were thrilled right off the bat, but that is not the same as completely satisfied,” said Chris German, chief scientist for the National Deep Submergence Facility (NDSF) at Woods Hole Oceanographic Institution. “The imagery is undoubtedly better than we had before, but we want to learn how to coax the very best out of the systems.”

“Scientists get their most value by zooming in—on tiny animals living on the rim of a tubeworm, for example,” German said. So on Alvin’s second dive Monday, he found an interestingly patterned starfish to experiment with. At some point when he zoomed in, the image began to blur. “There wasn’t enough illumination to get the crisp focus we want when we are zoomed all the way in, even though when we zoom out far enough to look at the whole starfish, the video looks pretty cool.

“So the options are to add lights, which draw more battery power, or try to do better with the lighting on the sub that we already had,” he said.

Tweaking the lights
Proceeding step by step, they tried option No. 2 on Alvin’s dive on Wednesday. Overnight between dives, the Alvin Group reoriented lighting on a bar above the sub’s forward-looking viewports. They aimed to provide more illumination on areas covered by the cameras on the side of Alvin’s payload basket.

Amanda Demopoulos, a biologist at the U.S. Geological Survey, tried the experiment again, targeting small “ice worms.” These critters bore happily in gas hydrates—natural gas that has been solidified by the cold temperature and high pressure in the deep sea.

The lighting revisions eliminated an annoying glare off Alvin’s basket that scientists saw on the previous day’s dive, but the changes still didn’t solve the zoom-focus problem. So it was time to try the next experiment: adding more lights.

That required a complex and time-consuming process to rig additional electrical connections to power the lights. Engineers used Alvin’s off day Thursday to do that.

Two additional lights were added on the sub’s basket below the viewports and cameras. The idea is to cast more light nearer to the seafloor and through fewer scattering particles of organic debris swirling through the water. The team of scientists and engineers thinks this should enhance imaging from the cameras just above the viewports and, in theory, also from the cameras on the brow of the sub.

Engineers also attached another light on Alvin’s starboard arm, as pilots prefer to use the port one for manipulations. (Yes, Alvin is a lefty.) Again, in theory, any time Alvin pilots use the port arm to work around a seafloor site, scientists can also ask them to point the starboard arm to shine more light and enhance video quality.

WHOI scientist Adam Soule will test these ideas Friday when he dives in Alvin. “If the latest upgrades still don’t work right away, at least we now have all the electrical wiring sorted out for the additional lighting,” German said. “Being able to reposition those added lights in different locations elsewhere on the sub, as we close in on lighting perfection, will be much easier to continue doing between dives for the rest of this trip.”

A flood of video
This verification cruise has also provided the first field tests of the sub’s complex new system to collect the flood of video streaming from the new camera systems, as well as the data recorded from all the submarine’s instruments and sensors. As the research team examined the video recordings from Alvin’s first four dives, they discovered gaps in the data stream.

“The video distribution system is quite complex, with five new high-definition camera sources, a video switcher that routes multiple inputs to many different outputs, and an audio and time coder embedder, for example,” he said. “There are a lot of potential issues to track down and eliminate, and we’ve been conducting an intensive effort to understand and eventually correct the causes of the gaps.”

Thursday was also a day to assess Atlantis’ system to launch and recover Alvin, which was also significantly upgraded to accommodate the new, heavier sub.

The ship’s A-frame, for example, was overhauled. This gargantuan lift hoists the 43,000-pound sub off the deck and moves it off the stern. Thicker steel was added to reinforce the lower part of the A-frame. New cylinders that move the A-frame out over the water, as well as other components, were installed.

Thursday was a day to take a close inspection of this enormous and complex system and assess how it was performing after a few initial runs with the new sub, before getting ready to launch and recover Alvin again on Friday.